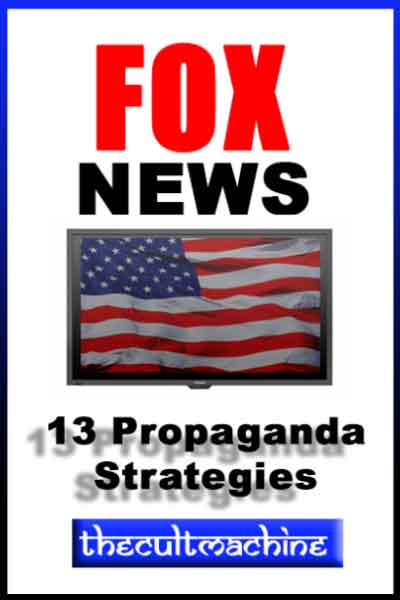 No organization on earth does brainwashing better than the Fox News propaganda machine.  The Fox effect has turned the conservative movement into a full-blown tin foil hat cult.  It’s all thanks to one man: Roger Ailes.  If you follow his methods, you can be a master propagandist as well.

Roger Ailes the great and powerful is the single greatest propagandist of our generation. Truth, impartiality, accuracy, accountability: All of these things are sent down the tubes with Fox news. Over at the network, basic tenants of journalism are used as toilet paper. Roger Ailes certainly has wiped his fat head with network ethics. Before his death, he’d mastered the art of putting sensationalism above journalism. In the case of Fox News, “news” is really only a buzzword to push a political agenda.

The tactics that are used by the Fox News propaganda machine are best described as Orwellian doublethink. Doublethink is a method of indoctrination.  A subject is expected to accept as true that which is clearly false or to simultaneously accept two mutually contradictory beliefs as correct.  Doublethink drastically violates a persons’ sense of reality.

In the Fox News propaganda machine, the first cases of doublethink occur with the Fox News slogan ‘fair and balanced.’ Viewers are meant to believe that what they are watching doesn’t depict a partisan bias in newscasting. Despite that, each viewer of Fox news is delivered a healthy dose of right-wing rhetoric.  It begins an onslaught of rhetoric that devolves into the most savage kind of propaganda.

Fox isn’t news. At best it is mischievous speculation & at its worst, it is full-blown right-wing propaganda.  Ideological institutions have a difficult time not skewing the facts in favor of their constituents.  The Fox News Propaganda Machine has a clear bias and political allegiance.  There is no question that Roger Ailes has made himself an ally to the republican party.

In 1968 Ailes became Nixons “executive producer of television.” In subsequent campaigns, he’d use his television prowess to help Ronald Regan and George HW Bush get elected into the white house.  It’s clear Ailes has a right-wing Republican allegiance. It didn’t stop there though.

In 2011 a document was released.  It was entitled “A Plan to Put the GOP on the News.” The letter describes, in detail, how Nixon aides could circumvent the journalistic integrity of News in order to deliver pro-administration propaganda.   how would later make his first attempt at right-wing broadcasting with Television News Incorporated?  However, the network was a bomb. People just weren’t ready for right-wing propaganda just yet.

All of this shows that Ailes clearly was working as a Republican shill.  Although his first attempt at creating a propaganda machine was a failure, he would ultimately perfect his technique.  Thus Fox News would be born.

One of the primary methods of the Fox news Propaganda machine is Smear campaigns of deception. During Obama’s campaign, Fox News continuously harassed him.  They built segments around stupid things.  By using innuendo and insinuation they were able to label President Obama as a communist/Muslim/Fascist/Marxist. They built entire segments around this mischievous speculation.

Are these mischievous tactics any sort of News?  I submit that it cannot be journalism.  Fox News “journalism” is a competition of opposing narratives rather than a search for the truth. This propaganda machine conducts political campaigns under the guise of news. The political narratives used against Obama were clear sensationalism and smear campaigns.   and rhetoric as news. Talk radio disguised as news.

The outrageous makes it prominent.  In 2015 Terrorists attacked a French satirical magazine called Charlie Hebdo. From all other News organizations, we could expect the generic news response. Judge Janine however, came on air and snarled; “We need to kill them!” (referring to suspected terrorists). Fox News Propaganda is full of outrageous and outlandish displays like this.  The nuanced does no justice. Building an adequate political narrative requires interruptions of the mental state.  Nothing does that better than being over the top.

In 2015 Carl Cameron looked into the News camera with his beady little black eyes and told viewers that a new national Monmouth University poll “may or may not actually be” one of the polls included in the average.   These polls included in the average determine who will participate in the first GOP presidential debates (for 2016 election). However, Monmouth uses standard methodological techniques that just so happen to meet the Fox News network criteria.  Coincidence?  Nope.  Cherry Picking.

Fox News and its affiliates live in a black or white world. Once the Fox News Propaganda machine has targeted someone or something it stands 100% in opposition to it.  This binary world view constricts the mind.

The Fox News Propaganda machine thrives on this simple fallacy. Take for instance its stance on Healthcare in America.  Fox News has dug heels in on this topic.  It’s done everything that it could to deface healthcare and sabotage any attempt to ameliorate the American Healthcare system.

In one debate with Colmes, O’Reilly states that  “Obamacare was never about health care. It was always about government power and control.”  Here the simple concept of reformed healthcare leads down a slippery slope towards totalitarianism.  This sort of ridiculous reasoning acts to stifle free thought for fallacious rhetorical logic.

6. Defame the Character of your political opponents

Smear politicos that don’t agree with you. Remember how Fox News frequently lambasted Obama? It still goes on to this day. In fact, the term ‘Socialist’ gets tossed around an awful lot nowadays on the Fox News network.  Often terms like ‘socialism’ and ‘communism’ are unsubstantiated whatsoever.  Fox News has miraculously painted the entire Democratic party as ‘radical Marxists.’

Misinformation and redirecting people. Run them in circles chasing their blue-collar tails. Misinformation references ring around the audience.  Sideshow reality in on itself and out of conditional spaces. Strategies for this roundabout include; Video cuts and great editing, tabloid Journalism & news that is modeled after bread & circus’.  Press releases become Newscasts.  History is rewritten. Pro-political content distribution is touted as independent journalism.

Define your bias and keep audiences thinking about something else. Subliminal messages. Innuendo. Priorities know your audience and tailor your messages accordingly. Remember the Obama birther campaign movement conspiracy theory.

The knee jerk reaction is an integral part of the fox news arsenal.  The mind of the audience is a battlefield.  Prey upon people’s fears.  Antagonize their fight or flight.

If you haven’t noticed, there is excessive use of the American Flag in Fox News networking.  What is their angle here?  It’s as if they’re positioning themselves as some government-sanctioned state-run news organization. This is something that President Donald Trump hinted at.  What is it with the Fox news American flag logo anyway? No other symbol better represents the American national identity.  Since when has it been permissible to hijack that symbol towards corporate use?

Jan 17, 2007, Played up false allegations of Obama’s past.  He’d spent 4 years in Indonesia Muslim seminary. Naturally, the conservative media smeared it as if here he’d been indoctrinated into Wahabi extremism.  However, the fact was that it was mere speculation.

Commentary and conjecture. Lies can sound like facts.  That is when you say things authoritatively.

Media is a political megaphone. Hire cronies as your pundits. The target demographic for Fox news is myopic blue-collar used car salesmen. Let your talking heads lead a movement. Getting their blood boiling.

If you want to become a master of your own propaganda machine then take advice from the Fox New propaganda Machine. Agenda comes first.  Ignore points of view that don’t align with your own. Facts are for fascists. “government-run healthcare leads to terrorism.” It doesn’t matter how big the story is.  What only matters is how big you can make it seem.  Imbed small stories into larger stories.  Appeal to people with your opinions and not with facts.  Use Euphemisms & dysphemism abundantly.

Always remember that people are rubes.  There is a chump born every minute.  With the right propaganda tools in place. Anybody will fall for your questionable journalism.