So I read that this guy got fired over posting a meme to his facebook. I was shocked as much as anybody else to hear the news. I mean, it seems like a weird over-exaggeration. Apparently it was real.

Anyway, here is the meme in question that the guy got fired over

Don’t tell me that if you saw this cute little dancing and pooping Elmo doll on your Facebook feed, you would think anything of it.  That’s because posting stuff to your social media has become the modern-day equivalent of standing by the water cooler.  Besides, all of us wage workers know we’ve been given the shaft one way or the other.  Letting out a little steam once in a while is a completely normal reaction to spending your every waking moment dedicated to marching to the beat of another person’s drum.

Why is this boss so hypersensitive about exploiting people’s labor?  I think that it is because he harbors some sort of internal guilt.  And furthermore, who gets mad about someone posting a meme?  It becomes apparent that this boss takes himself way too seriously or doesn’t know how to be a team leader.  Labor relations are an integral part of running a successful enterprise by the way. An inherent class struggle is inevitable, so why fight it?  If an employer can see things from the perspective of his employee it allows for a far deeper connection than just expecting unbridled obedience.

A boss is not your friend.  Even when a boss tries to come off as a friend it doesn’t weaken the control that he/she has over the employees.  According to the philosopher Slavoj Zizek there are a few weird things that keep people falling in line with the demands of authority figures in the modern era.

According to Zizek, “Power functions only in so far as it mocks itself.  We must get the figure of a master who rules through a display of his castration.  A master who claims he is our pal, who renounces his insignia, he presents himself as an equal friend while retaining all of his authority.  With the help of this very self-debasement.”

So why did this boss make such a fuss about the employee?

I want to say that the boss knew this employee’s chagrin all along.  It really can’t be all that hard for someone to just take a look at the monotonous routine of an employee and assume that he/she enjoys living that way.  It’s not like these power relations between the employee and employer are all that secret.  For the reason of the employers’ reaction, I still have to refer again to Zizek.
“Disclosing the problematic data becomes the source of annoyance.”

I’ve always tried to help and foster that sort of blatant dissent in the ranks of the workforce.  If you haven’t already I’d invite you to read my previous blog on some of my experiences with my own experience as an employee. It is for that very reason that I’ve always tried to err on the side of dissent. Lastly, I think that this meme posting guy would have been a great addition to the cult machine team. I sent this whole thing over to one of the authors here on this site Ricky Spanish. He totally agreed. 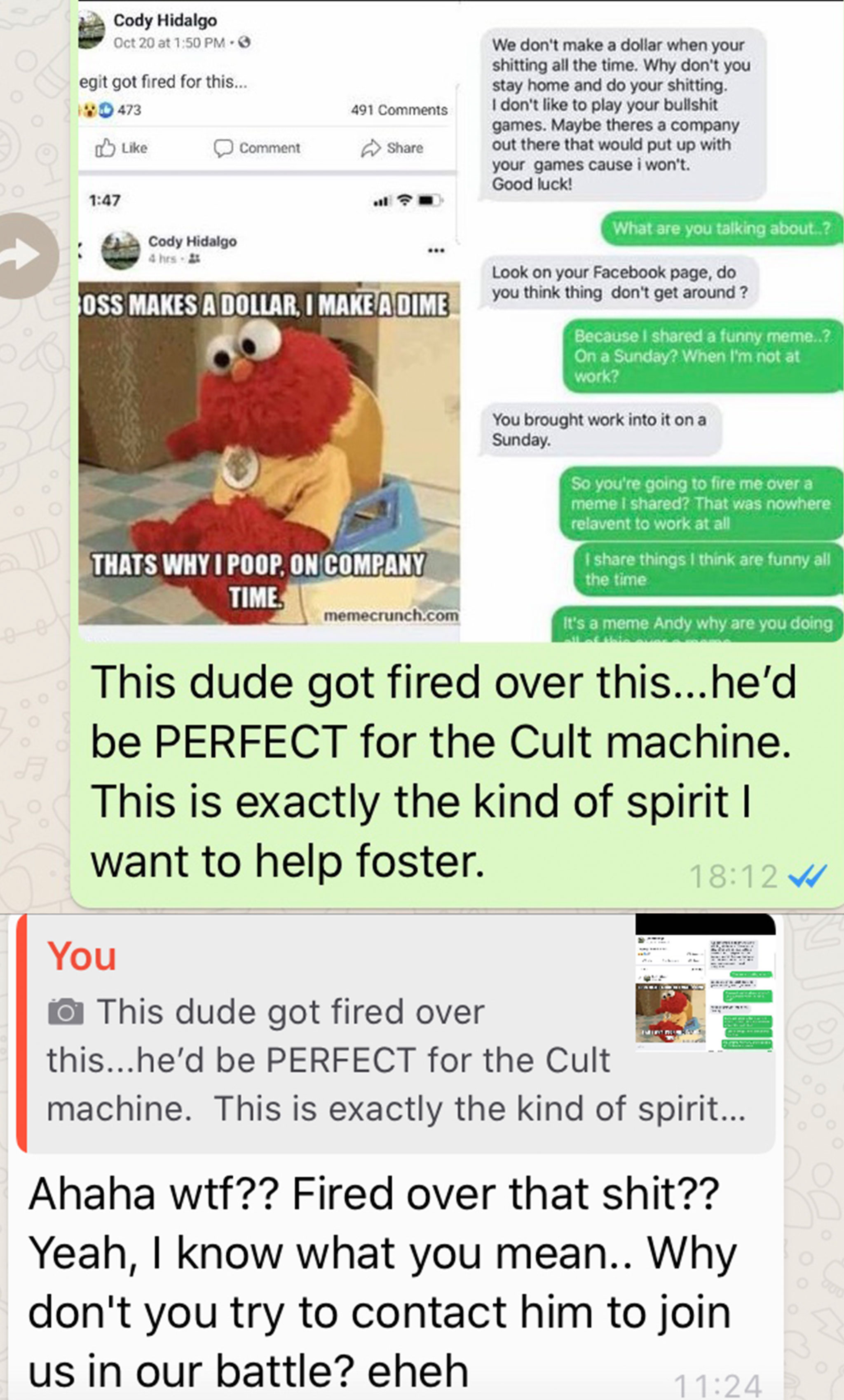 More From: Capitalism is a Religion

Join The Cult!All Hail The Machine!
Secured By miniOrange