What is Satori in Zen Buddhism and How do I Achieve it? 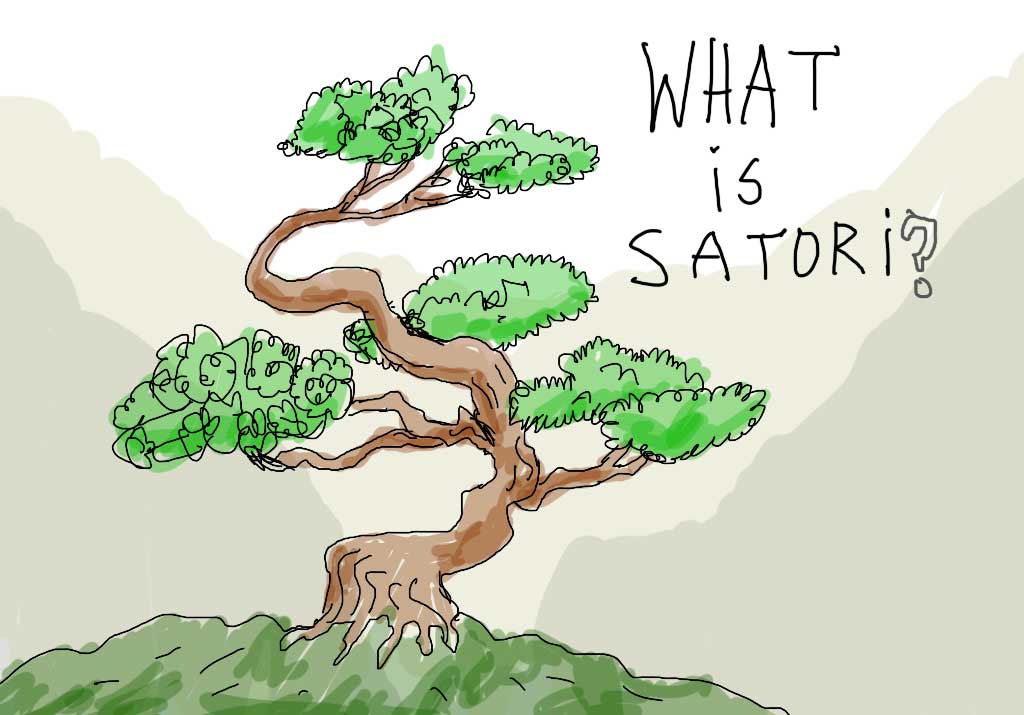 I remember when I first achieved Satori consciousness.  There wasn’t a bell that rung in the back of mind, or a shimmering light that opened up in the heavens and shone down onto my head. As a matter of fact it was a very busy summer night while I was working as a bar tender.  Amazingly, for some reason, in a dimly lit bar with a full house of people leaning on the counter waving their money in the air at me, I completely lost my ego. Everything fell apart around me (hypothetically speaking) and I was just focused without a thought.

The experience was like having all delusions fade away. All life and time was a rocket ship and I was on the nose end of it. I could feel all cosmic energy from the beginning of time and the big bang and beyond into the Multi-verse and multi-verse of multiverses all condescend and focused down into this one single moment.

Just as fast as it came, it fizzled away. No matter how hard I tried, I couldn’t get it back. It lasted maybe 2 and a half minutes and was gone…..

What is Satori in Buddhism Defined?

To answer the question What is Satori in Buddhism: Satori Zen is a school of Zen that emphasizes the importance of sudden enlightenment. The word satori comes from the Japanese word for “awakening” or “enlightenment.” Satori Zen is sometimes also known as kenshō Zen, which means “seeing one’s true nature.” The goal of Satori Zen is to help students achieve a sudden understanding of the true nature of reality. This understanding is often referred to as satori or kenshō. Satori Zen is based on the belief that all beings are intrinsically enlightened, but they may not be aware of it. The purpose of Zen practice is to help people realize their true nature and achieve liberation from suffering. Satori Zen is sometimes compared to other schools of Zen, such as Rinzai Zen and Obaku Zen. However, Satori Zen places more emphasis on the importance of sudden enlightenment, while Rinzai and Obaku Zen focus more on gradual progress through meditation and study.

Everybody experiences Satori in short bursts. The trick is to prolong that state.  That is what Monks are striving for. Buddha and Jesus are special because of their uncanny ability to take that state and stretch it out for all its worth…

The truth is you damn well know what Satori feels like. Every person has the Buddha inside of them. At some point in everyones life they’ve had that moment of clarity….Its fleeting though and the commotion of everyday life and worries sets back in again.

In truth Satori is nothing to write home about. The problem with it, is that it is so common. Hiding there behind everyday consciousness. It just waits. In the practice of Zen nothing is added, instead it is the practice of removing those mental distractions which guard you against Satori.

How do you achieve it Satori Consciousness?

It was like having your ego pulled out from under you. An unimaginable sense of presence and focus overcomes you and the world becomes truly naked to you in every sense and form that you can describe.  Satori is a raw state where God and the entire cosmic being is naked to you in its glory.…You won’t believe me to tell you though, it’s not as special as you think. You’ve experienced it in your own life, when you were young.  In fleeting moments it came to you and you tuned it out as nothing special.  However you go there, you can return to it in your mind and your heart from time to time. Remembering those moments.

As per official Buddha Lore, Buddha came to enlightenment haphazardly as a child.  While his dad was being officiated at at a spring plowing festival, the then eight-year-old Prince Siddhartha was left alone in the shade of a rose apple tree.  Here, he felt a state of profound calm.

Twenty seven years later as a starving ascetic Buddha still couldn’t recreate that intense sense of calm that he’d experienced under the rose tree in the castle garden.

So Zazen is one of the most practiced ways that Zen will try and achieve Satori in Zen Buddhism. This includes many techniques and meditation practices. You can check out the article that I wrote here on Zazen meditation and its many meditation postures.

It’s like a natural state.  You can’t really “achieve” it. It’s always there in the background.  Maybe when you’re laying in the bathtub, and all your cares melt away around you.  Slowly, you can slip into a

As I’ve said before; person on this planet has fallen into this state before (haphazardly).  For me it was when I was about 4-5 years old (roughly).  I was sitting with my back up against the couch and I pulled a brown blanket over my head and just sat there under the blanket.  Sprinkles of yellow house light shone through the stitching like a starry night canopy.

What I remember about Satori, was that I just sat there and felt very tiny and very large.  An inkling in me tells me that this is the cosmic body and the physical body.  What Satori was for me is the coming together of these two bodies and realizing that I am interconnected.  Our physical bodies spring forth as a result of the world and the cosmos.  However, when you think about it, you’re really not separate from it.  In fact, you could say that it’s just an extension of your physical body altogether.

As a result I could feel my cosmic body and that everlasting very large expansive body that is all things. Like Jake the Dog from the episode of adventure time when “Everything is Jake.”

What is the difference between Enlightenment and Satori?

If you check up on the dictionary definition of Satori and Enlightenment, you’ll find that they are pretty much identical.

Enlightenment – the action or state of attaining or having attained spiritual knowledge or insight, in particular (in Buddhism) that awareness which frees a person from the cycle of rebirth.

Is Satori a different State of Consciousness?

Enlightenment itself relates to the 4th state. If you’re a Shivaite (meaning you practice Shiivism) you’d be familiar with they term Turya.  Kashmir Shaivism holds the state called Turiya – the fourth state. It is neither wakefulness, dreaming, nor deep sleep. In reality, it exists in the junction between any of these three states, i.e. between waking and dreaming, between dreaming and deep sleep, and between deep sleep and waking.

So to answer the question What is Satori in Buddhism?