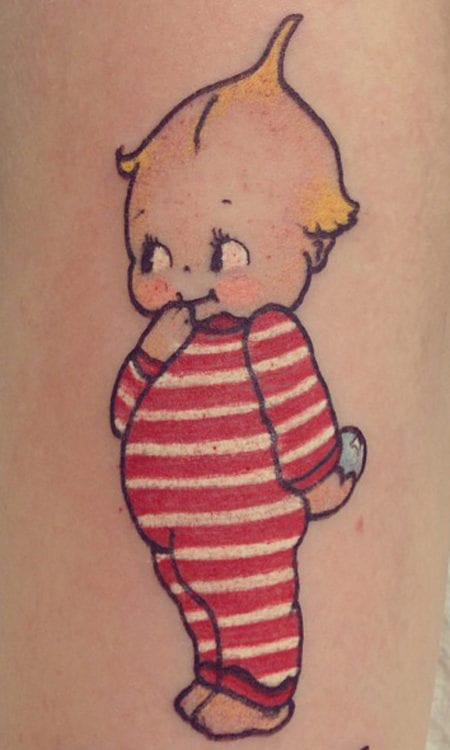 Those little kewpie doll tattoos are just so loveable, aren’t they? He is always smiling, even in the darkest of times. Kewpie is always happy just to be a part of your skin.  However innocuous he is, the Kewpie doll tattoo symbolism is a very powerful image to add to your collection.

Anyway, to understand Kewpie doll Symbolism more we have to go back to his origins.

Origin of the Kewpie Doll:

Kewpie started out as a comic strip at the beginning of the twentieth century.  However, with Kewpies growing popularity he was eventually developed into a doll to be sold mass market.  It is where the idiom, “to win a Kewpie doll”, comes from which means: to get a modest prize.

Over the years Kewpies image would be so heavily engrained int the American psyche that he would eventually be developed into a tattoo.  However, like the Greek portrayal of Cupid, “Kewpie” would also adopt the ability to take on multiple forms.

Cupie is drawn as being Cupid (except without wings).

Of Course no longer being a God sort of brings him down to earth…if you catch my drift.

Kewpie gets to be the go-between for God and Man.

The Kewpie tattoo should be placed on the lower back. However, the place for him is not directly in the middle of the “zone of sexuality” commonly known as the “tramp stamp.”

The Kewpie tattoo is just fun, besides, times go bad. Kewpie reminds us to keep a childish sense of joy.

Babies are a Powerful Symbolic Force:

The baby at the end of 2001 Space Odyssey represents new beginnings. He also represented the next stage in human evolution.

The Child is Nietzsche’s third metamorphosis.

Sometimes we run into life’s difficulties. To become a child, Nietzsche proclaims, means to once again realize (as an adult) the seriousness one had as a child at play.

In Conclusion to Kewpie Tattoo Symbolism:

A child-like spirit is essential to a persons well-being.  As Nietzsche says: “is innocence and forgetting, a new beginning, a sport, a self-propelling wheel, a Sacred Yes (Zarathustra, 55).

Kewpie recognizes the joy of life. When you wear Kewpie on your skin he acts as a psychic symbol to help you manifest that in your life.