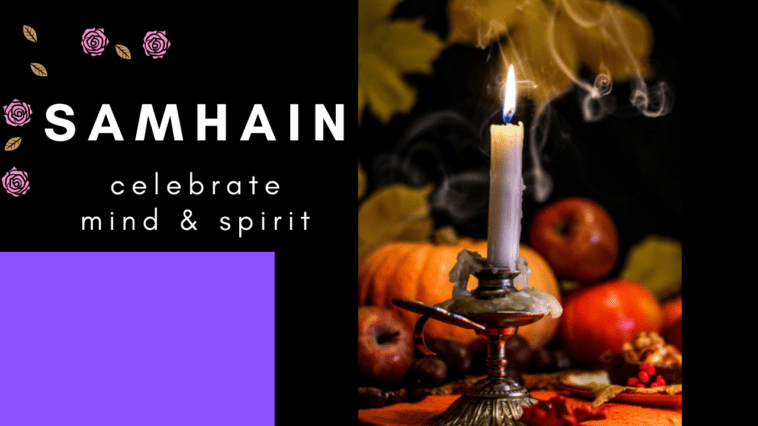 Those who are outside of the Pagan belief system refer to Samhain as Halloween, however for the many modern Pagans of the world, Samhain is widely considered to be a Sabbat that honors the ancestors who have come before us, and this day marks the dark time of the year. Samhain is a wonderful time to be able to make contact with the spirit world because this is the time of year when the veil between our world and the next is at its thinnest. In this brief article, we will be exploring the history of Samhain, and also will be providing you with some of the best ways that you can celebrate this incredible holiday.

What is Samhain?
Samhain celebrations vary according to both geography and spiritual tradition. Some Pagans opt to celebrate Samhain over the duration of a few days and nights, and such observances tend to include a series of solo rites and also various types of feasts, gatherings, and ceremonies. In the northern hemisphere, Samhain is celebrated from sundown on October 31 through November 1. However, Samhain celebrations can also be held on the closest weekend, the Full Moon or the New Moon (whichever is closest to this time). Some Pagans even opt to observe Samhain a little bit later (closer to November 6) in order to more closely coincide with the astronomical midpoint between the Fall Equinox and the Winter Solstice.

Samhain was not named for an ancient Celtic god of death (or of anything else, for that matter), the word Samhain (pronounced “sow-en”or “sah-win”) is derived from the Gaelic word “Samhuin,” however religious scholars are divided on whether the term means the end or the beginning of summer. This is due to the fact that when summer is ending in our realm, it is actually just starting in the Underworld. Samhain also actually refers to the daylight aspect of the holiday which falls on November 1st.

For Ancient Celts, Samhain was marked as being one of the most significant of all of the four quarterly fire festivals, as it took place during the midpoint between the winter solstice and the fall equinox. At this point in the year, hearth fires would burn in family homes and would be left to burn out as the harvest was collected. When the harvest was complete, celebrants would join in with the Druid priests to light a fire in the community by utilizing a wheel which caused friction and sparked the flames needed to create the large fire. This wheel was also used as a representation of the sun and was also used for prayers as well. During these Samhain festivals, cattle were sacrificed, and gatherers would take a flame from the bonfire to bring back to their home to relight their hearth.

According to early texts Samhain was a mandatory celebration in the community and lasted three days and three nights, participants were required to show themselves to local chieftains or kings, and failure to participate would result in punishment from the gods, typically in the form of sickness or death. Other texts mention six days of drinking alcohol to excess (usually beer or mead), and gluttonous feasts to the abundance. As the Celts believed that the barrier or veil between worlds was at its most thin during Samhain, they would prepare offerings to be left outside of the fields and villages for fairies (“Sidhs”).

As it was believed that the ancestors were able to cross over into our world during this time, ancient Celts would often dress up as monsters and animals so that fairies would not be tempted to kidnap them. Specific monsters were also associated with Samhain, including a shape-shifting being called a “Pukah” who received the harvest offerings of the field. Lady Gwyn was also referenced as being a headless woman clad in all white who chased night wanderers along with her black pig. The “Dullahan” was also believed to have appeared in the form of impish-like creatures, often headless men riding flame-eyed horses who could be seen carrying their heads. The appearance of the Dullahan was believed to be a death omen to anyone who came in contact with them. Furthermore, a group of hunters called the “Faery Host” were also believed to come out during Samhain and kidnap people. The “Sluagh”, was also believed to come at this time from the west to enter homes and steal souls.

By the Middle Ages, the celebrations of the fire festivals progressed and bonfires became known as “Samghnagans”, which were a lot more personal Samhain fires than the larger community ones. Samghnagans took place closer to farms and became family traditions that were aimed to protect families from evil fairies and witches. By the eighth century, the Catholic Church took it upon itself to use November 1st as “All Saints Day.” As local pagans were already celebrating that day, it was important to Catholics to take this day and conform it to fit the needs of the Church. All Saints Day became a festival that was aimed to honor any saint who did not already have their own personal day. Mass that was said on All Saints Day was called “Allhallowmas” (the mass of all those who are hallowed), and this name would eventually become “All Hallows Eve”, and ultimately “Halloween.”

Witches New Year
Sundown on Samhain marks the start of the Celtic New Year. This period ends the old year, when the harvest has been gathered, leaves are falling from the tree, and all of the sheep and cattle have been brought in from the fields. The earth is slowly beginning to die all around us, as we process new beginnings while reflecting upon the changes that occurred during the year.

Samhain is the perfect time to honor our ancestors. If you’ve never done genealogy research, now is a great time to delve in and explore who came before you in your bloodline. If you have had a loved one pass away in the past year or past few years, now is the perfect night to reflect and celebrate their memory. If you are fortunate, your ancestors and loved ones may return to communicate with you from beyond the veil to offer you advice, guidance, and protection for the new year.

Samhain can certainly be celebrated in the Celtic tradition by simply spreading out the festivities over the course of three consecutive days. Rituals and feasts can be held each night, but it is certainly okay to be flexible (especially if you have little ones who are eager to go trick-or-treating).

Here are some of the top rituals to help you celebrate Samhain and welcome in the Witches New Year!

This is one of the best ways to celebrate Samhain. The veil is at its thinnest during this time of year, meaning that it is the best time to reach out and make a connection with your ancestors. Honor your ancestors at your altar by placing photos, personal items, and offerings to them. Light a candle and say a prayer or meditate, reflecting upon their lives, thanking them for their guidance in your everyday life, and asking for any advice that they have to offer. Make a personal connection, they are here to listen and show you the way.

Hold a Seance at Samhain

Seances are most certainly not for everyone and should be approached with caution, however, if you are experienced and feel compelled, Samhain is a great day to conduct one and reach out to the spirit world.

A Dumb Supper simply refers to a feast that is held in silence in order to pay your respects to those who have passed on before you. Tables are set in black (or black and white) tableware, a chair or chairs are shrouded in a white sheet, and offerings to pay remembrance are to be placed on the chairs in memory of your loved ones. Dumb suppers can be as quaint or abundant as you like, do some research on them in order to obtain more ideas of what may work best for your personal needs and desires to honor your loved ones.

During Samhain, we are beginning to venture into the dark half of the year as the weather begins to cool down. Lighting a candle can add that magickal bit of warmth and bring light back into your home during this time.

As this is a time for reflection as we head into the New Year, this is also a time for releasing old, negative energy that may be holding you down. Reflect upon anything that has been holding you back or leaving your feeling “stuck,” make note of these feelings and release them to be taken away from you and into the darkness to be carried away.

•Feast: Samhain is the last harvest festival before the winter’s freeze. Honor this time with a feast that includes traditional seasonal produce, such as squash and pumpkins.

Samhain is one of the most favored holidays of the year for witches and Pagans. It is a time of self-reflection and honoring those who have come before us in order to learn from them and grow from their experiences. It should be noted that Samhain is a personal time as well, however, and you should not feel obligated to do anything that makes you feel uncomfortable. Celebrate and honor in your own manner, follow your path, and trust where and how you are being led, and you can’t go wrong.

Sending you all, Samhain blessings of love and light!