There are plenty of people who want to be spiritual but not religious. After all, some people find organized religion too constraining.  Truly, it isn’t for everybody. However, we all have an inherent desire to understand ourselves and make meaning of the Universe.  It’s true that religion offers a plethora of information on spirituality. Despite all of that though, it is entirely possible to be spiritual but not religious.

Religion isn’t for everyone.  However, we all have some part of ourselves that yearns for a higher understanding of our existence in the cosmos.  For those who wish to be spiritual but not religious, it will take a different path. Actually, in my opinion, this path is more effective for developing spirituality. Because there is no religious formula for one to travel one essentially has all at his/her disposal. In this way, you fall into the natural flow of spirituality rather than have it laid out before you. 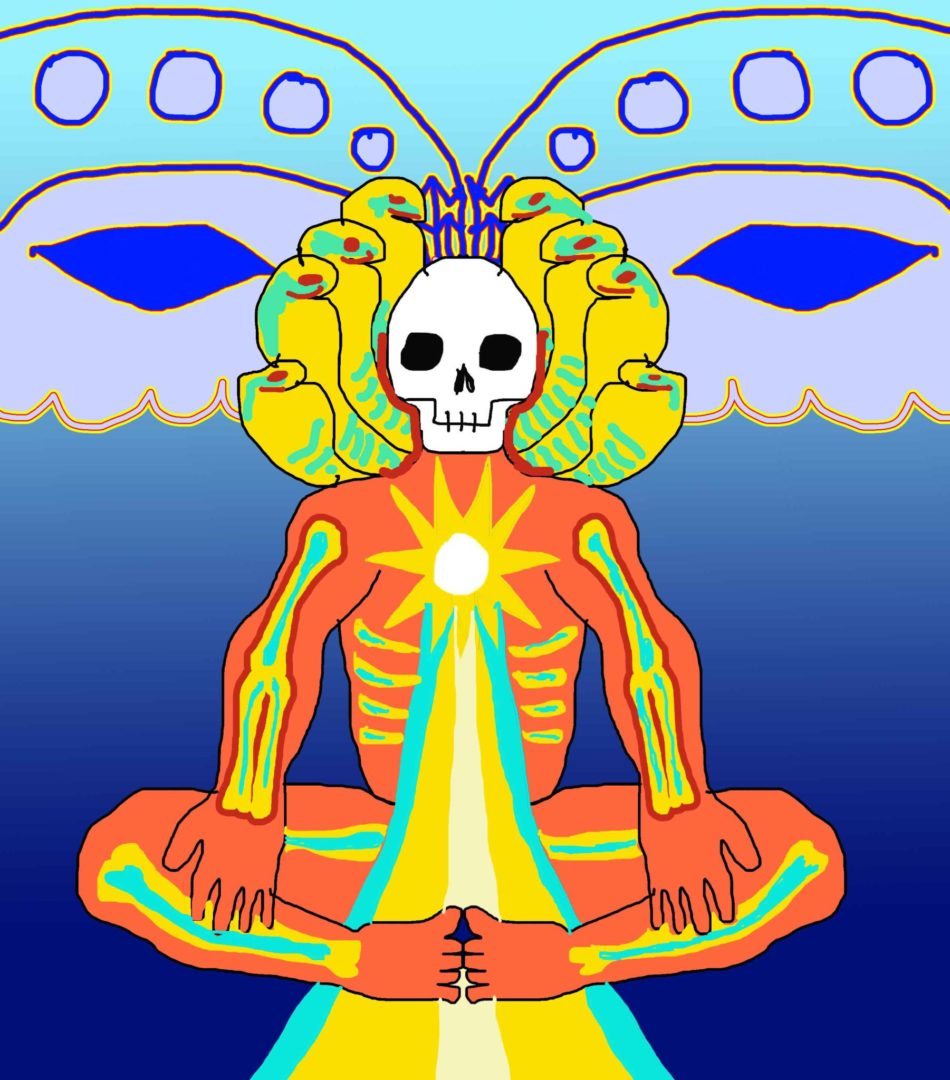 Getting past the association of Religion and Spirituality

Realize that organized religion is more about politics than about spirituality.  Human beings are social mammals.  We tend to organize ourselves based on a given dominance hierarchy. This is a kind of hierarchy based on power relations.  It allows people to establish things like rank, class, position, share, etc.  Organized religion has always acted as a mediation of these power relations. Religion can help to rationalize these institutions.

Take for example the ‘the Divine Rights of Kings.’ It has always been common for rulers to claim to be a God or ordained by God. In this way, rulers could proclaim their authority through a sort of lex naturalis or natural law.  Sensibility in a natural state could better justify power relations.  Essentially a person could be closer to God merely by participating socially.

This thought is not relegated to western cultures.  In India, for example, this system is called the Brahmin caste system. Under Hindu doctrine, this caste system organizes people into classes.  These different class each has its own set of responsibilities.  It’s essentially a division of labor.  It also helps determine the division of labor and marriage.  A similar adherence to spiritual premises exists in the Polynesian culture where Chiefs are seen as having more “mana.”

Spirituality, however, wasn’t formed through religion. It was merely hijacked! The emphasis on the transcendent is only an effect of

Misconceptions about ‘being religious’

Realize that there are many who are religious but not spiritual. A person can go to Church, Synagogue, Mosque, or Temple every day of the week and never be awakened from within.  In this way, that term ‘religious’ has simply come to mean “dutiful” or “diligent.”Spirituality, on the other hand, is about connecting with the soul.

Being spiritual but not religious doesn’t mean you won’t need to be dutiful or diligent.  Developing spirituality is still about devotion, communion, worship, redemption, salvation & submission.  The only problem is it is up to you alone to determine where to get that.  Christianity, for instance, uses Christ as the Axis Mundi.  He is the central figure and object of all the Spiritual dimension.  Christ provides salvation, communion, and all those things to his followers. If one confesses to Christ he/she is saved.  Hinduism, on the other hand, doesn’t require confession in this way.  Instead, a person is saved by being released from the constant cycle of death and rebirth known as Kharma.

Even if you don’t want to religiously explore religion.  You’ll still have to be religious in the sense of devoting time and energy to the practice of spirituality.  Religious texts are a great resource to dive into. As a matter of fact, since you don’t belong to anyone dogma you have the full spectrum of theological texts to pick from.  Devote yourself to all these teachings and find which one fits for you or develop your own yoga practice and discover a new path to the divine.

Spirituality without a Religious Community

If you’ve ever been to Church you’ll know the feeling of community. As I stated above, the Church and religion give you the sense of being connected to something greater.  Although that ‘greater’ thing may only be a community of people. Religion offers the community and community is a big factor in religious experience.

It helps to be connected with others who are on a  similar spiritual path.  The group offers you its support and guidance through your spiritual journey.  On top of that, we are social animals. Therefore being a part of something awakens natural instinct within us to connect with spirit.  However, having a religious community around spirituality is not the only way to have a spiritual experience.

It is common for spiritual practitioners to go at it alone.  Many Yogis and Gurus retreat for many months and sometimes years without any human contact. This is because they realize the power of developing spirit within themselves.  They are able to harness the power of the divine within, without relying on the influence and suggestion of religious dogma.  Your path will be similar to that of the Yogis.  Keep in mind, however, that many Yogis/Gurus have been somewhat indoctrinated into some sort of tradition.  It may be of tremendous benefit for you to read up on some teachings before crafting your own personal practice.

The non-Religious path to the Spirit

The spirit is difficult to pinpoint.  Science itself has completely written it off altogether.  Religion, on the other hand, has made the spirit central to its teaching.  Regardless of which doctrine one followers there tends to be a universality to this concept. Across all religions, it has many different names. Atman, Soul, Mana, Teotl, Spirit, Higher Consciousness etc.   If you intend on being spiritual but not religious then you’ll need to find some way to connect with the spirit. All that you need to know is that spirit is eternal.  It has been with you since before you were born & it will be with you long after your earthly body has passed away. Spirituality is the way in which one can seek out this essential force.

Worship can be a way to activate something profound within you.  This is because it is a celebration of the spirit.  Many religions lift themselves up through worship.  You will have to find some way to give devotion to the spirit as well.  In the Hindu tradition, darshan is the practice of beholding of a deity.  In their tradition statues and representations are known as Murti. They act as the mediators between man and the divine.  During ritualistic acts of Pooja, the practicing Hindu invites God into space and will give an offering or sacrament. Pooja offers devotional homage to the divine. If you are going to be spiritual but not religious you’ll have to find some way to do this as well.

Similarly, a person who is spiritual but not religious can find a way to do this as well.  Worship is a celebration of the eternal divine spirit. There are so many ways that this is practiced through religion.  It suggests that there is no right or wrong way to go about it.  Simply saying hallelujah can be a way to celebrate the divine.  However many modern non-denominational Christians have resorted to employing full rock and roll bands. By taking one from the Christians you can also come up with your own method.

Benefits of being spiritual but not religious

Religious dogma relegates you to one practice, one source of knowledge.  Then it elevates that knowledge above all other knowledge.  Part of this is a pure lack of creativity. It hampers many churches and constrains them to a singular one-sided worldview.  As a result, their spiritual practice becomes hindered.  Reaching that higher state of being is left by the wayside.  Instead, churches, demand coherence, and obedience to their dictates.

Being spiritual but not religious, on the other hand, is far less constraining.  Religious figures have always been fingers pointing to the spiritual.  However, religions have focused on finger-pointers rather than the spirit itself.  As a person who is spiritual without religion, you can learn from all of these religious figures without getting caught up in a single dogma.

Hear the Cosmic Poetry of an Astrophysicist.  Neil Degrasse Tyson is definitely giving a spiritual testimony despite being non-religious.

Essentially we all make our individual peace with the cosmos. Some call it the universe, others call it God. It really doesn’t matter. Likewise, there are many who will find benefit in being part of organized religion.  Others though may find dogmatic religion too constraining.  As a spiritual seeker, you can mishmash.  You’ll need to see which works best for you.  Since you don’t have to be constrained to any doctrine or order you really have a much broader spectrum.  Take-in as much as you can.  Your spiritual journey will be a long process. In the end, though, you’ll find what you are looking for.

“That which you seek is seeking you.”