The Evil Eye in Hindi Culture 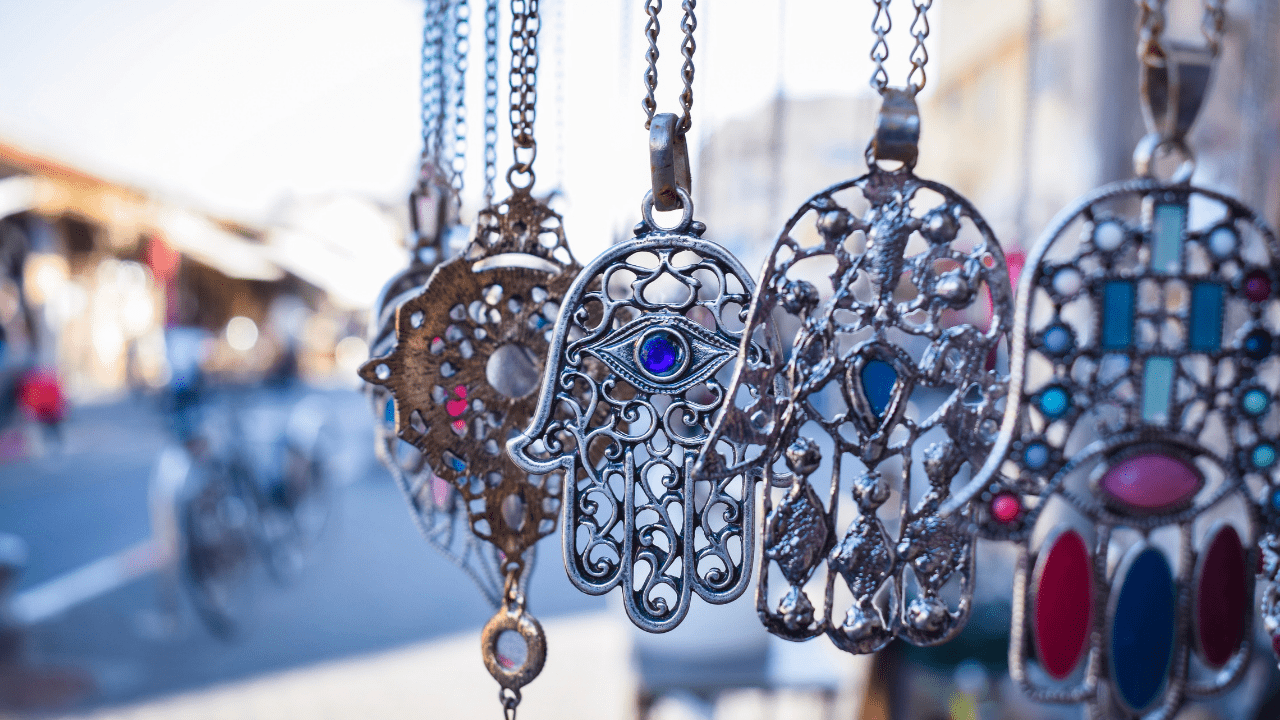 In Hindu culture, the evil eye or ‘Nazar’ is a prevalent belief. Hindus, like other cultures, believe that an evil glance or stare may bring bad luck.

The evil eye in Hindi culture has been prevalent since ancient times. It’s believed to be a curse cast on people through jealousy and envy by specific individuals who are jealous of the excellent fortune others have had. Many Hindu gods, including Krishna and Shiva, have been adorned with the evil eye symbol.

They believed that they could pass on this curse to others through a glance or just an image of someone who’d cast it upon them so that people would hang up paintings of eyes as good luck charms for protection from such curses.

Nowadays, these symbols are primarily used in jewelry worn by women in India.

The evil eye meaning in Hindi can be translated to “Nazar utarna, bhasm ho Jana.” In the dictionary, Nazar means ‘eye’ or sometimes, an evil glance.

The Hindus that believe in this superstition say that if someone has received bad luck because of the evil eye, then some terrible things will happen to them; their house may catch on fire, they may get a call from the doctor with news that someone in their family has been involved in an accident or something similar.

The evil eye in Hindi is seen as a bad omen that can bring physical or mental illness to the person who receives it.

One of the ways people protect themselves from receiving this harmful gaze is by wearing an amulet called ‘Tilak.’ This can be a red dot on their forehead or a charm made of black beads.

Many children in Hindi culture wear a ‘Tilak’ to protect themselves from the evil eye, which would bring them sickness and disease.

Some adults also choose to decorate their houses with idols that have eyes painted on them to protect their homes from the evil eye.

Many people in Hindi culture believe that when they admire something, such as a house or car, somebody else might try and ruin it for you out of envy, so they will say “Nazar Nahin lagaya,” which means I haven’t cast an evil glance.

You can find the concept of an evil eye in many stories and folklores. It has been said that there are several forms of Nazar, including:

Evil eyes in various forms are considered a common superstition among Hindus all over the world. It is believed that a person can cast an evil eye through envious thoughts and feelings, which may harm others by inflicting illness or bad luck on them.

Many symbols used throughout India represent protection from the gaze of someone who has cast an evil eye on you. These symbols absorb negative energies and deflect them back from whence they came, protecting the person gazed at.

The most popular evil eye talisman is the ‘Nazar Boncuğu,’ which means ‘eye without a pupil.’ It’s one of many charms that hang on walls or above doorways in homes, shops, offices, and cars.

Another common symbol is the ‘Sajde ki Gori,’ meaning a snake with its tail in his mouth- often seen as an ouroboros. It’s considered one of many symbols originating from India intended to protect against evil forces or bad luck.

Other symbols used for protection against the evil eye include Shanka or ‘the boat,’ which is a structure depicted in an S shape made of metal. The third symbol used to protect against the evil eye is called Shitalamati. It’s two pieces of string cross over one another with talismans attached at the bottom and top.

Evil Eye Beliefs Around the World

A common symbol for protection against the Evil Eye is making a circle with one’s thumb and index finger.

You can find an example of an evil eye belief in a different culture from the Middle Eastern countries, where it is believed that if someone stares at you with envy or admiration, then they cast on your house ‘Nazar, which means negative energy and misfortune will follow you wherever you go. To protect yourself against this harm caused by the evil eye, you can decorate your house or car with an Evil Eye talisman to deflect the negative energy back from whence it came.

For example, in some Arab countries, people regard blue as a protective color against the Nazar. If somebody admires something, they say “B’khol inshallah,” which means may God give you more of this.

The Evil Eye in Different Colors

Besides blue, other colors considered protective against the evil eye include black, which is meant to deflect lousy energy back into its source or onto a wall where it cannot affect you.

Yellow and green also have associations with protection from the Evil Eye, such as getting rid of negative energy.

In India, there is an ancient custom of writing ‘Om’ (Aum) on the wall in mustard oil with a cotton swab to protect against Evil Eye.

To deflect any negative energy or ill wishes from others, you can decorate your home with images and symbols representing protection from envy or someone who has cast an evil eye upon you. These symbols may include the ‘Nazar Boncuğu’ or charms that hang from doorways, cars, and walls.

In addition to decorating your home with symbols of protection, you can also wear talismans such as Evil Eye bracelets which are meant to protect against harm caused by someone who has cast an evil eye upon you.

How to Pronounce the Evil Eye in Hindi

To pronounce the evil eye in Hindi, you can say “neechay bukhaar,” which means a person’s gaze has harmed you.

Neeche and Nishaan: The Evil Eye and Its Superstitions in India

The third symbol used to protect against the evil eye is called Shitalamati. It’s two pieces of string cross over one another with talismans attached at the bottom and top.

In most cultures around the world, a person who has cast an evil eye on you is someone who either admires something or stares with envy in your direction. Protect yourself from any harm caused by this negative energy, especially if someone is staring at you or your family members.

Another common belief about the evil eye in India is that you can cure it by wearing different charms and amulets on one’s body, such as a blue stone like turquoise, which symbolizes protection against negative energy while also warding off any harm caused by a person who has cast an evil eye on you.

To protect yourself from negative energy and people casting a spell on your family, it’s essential to stay aware of the signs that someone might be envious or looking at you with admiration, such as admiring something in your house or staring directly into your eyes for an extended period.

Is Nazar and evil eye the same thing?

There is a direct link between the evil eye and Nazar, a kind of spell that harms you or your family. This negative energy can be cast by someone who either looks with envy upon something in your home or admires it for an extended period.

The legend of Nazar is that a person can cast it upon you or your family by looking at whatever they covet intensely for some time. This negative energy is called ‘Nazar .’ To protect yourself from any harm caused by this spell, many people decorate their homes with symbols of protection such as blue eyes charms or images on the wall painted in mustard.

To protect yourself from this type of negative energy and any ill wishes coming from someone who admires something in your home, it’s essential to wear Evil Eye bracelets such as the Hamsa hand charm, a famous symbol against Nazar.

In Hindi culture, there are several myths and superstitions about the evil eye that include different colors representing protection from envy or the ill wishes of others.

Some of these symbols include images painted in mustard oil with a cotton swab to protect against the evil eye, the Hamsa hand charm meant to ward off any negative energy, and pendants made of string which symbolize protection from a person who has cast an evil spell on you.

To deflect or remove any harmful spells from someone who may envy something in your home, wear blue eye charms to deflect any negative energy back towards the person who has cast it upon you.

Evil eye meaning in other cultures

In African cultures, the evil eye is called Nyanga, which means ‘gaping mouth,’ and in this culture, it’s believed that envy can be cast upon you by someone looking at something they desire intensely.

In South American cultures, there are similar superstitions about envy being cast through a person’s eyes with images painted on houses to ward off any negative energy.

In the Middle East, a symbol known as the Hamsa hand is used to ward off any negative energy from someone who might have cast an evil spell upon you and is also believed to offer protection against bad luck or ill wishes.

Turkish culture is considered extremely rude if a person stares at something without permission for too long, which signifies that they might have cast an evil spell on you.

In Egyptian culture, the image of blue eyes is often painted on houses to protect against bad energy coming from someone who has looked at something with envy or admiration for too long and also believed to deflect any harm caused by it back towards them.

The evil eye definition and its significance vary widely among cultures. Still, it is shared across most countries where people believe that envy can be cast upon you or your family members by someone who looks at something they desire intensely for some time.

Protective Measures Against the Evil Eye

In Hindu culture, the evil eye is called ‘Nazar .’ To protect yourself from any harm caused by this spell, many people decorate their homes with symbols of protection such as blue eyes charms or images on the wall painted in mustard.

For example, in African cultures like Kenya, you can place a mirror behind your back while talking to someone because it’s believed that it reflects the evil eye right back to them.

In Mexican culture, there are several superstitions about protecting yourself from any negative energy, such as not whistling or wearing specific colors like red which is associated with negativity, and black since this color absorbs anything harmful.

In some cultures, people have been known to wear blue eye charms to deflect any negative energy back towards the person who has cast it upon them.

Other Translations for the Evil Eye

When translated, evil eye means ‘Achatchi’ in Mexican culture and this superstition says not to whistle or wear black since this color absorbs all harmful energy around you.

When translated, evil eye means ‘Baskou’ in Japanese, and in this culture, it is believed that the evil eye comes from someone with envy for what you have.