What did Nietzsche Think of Hegel?

Spiritual Seekers of the World, unite. 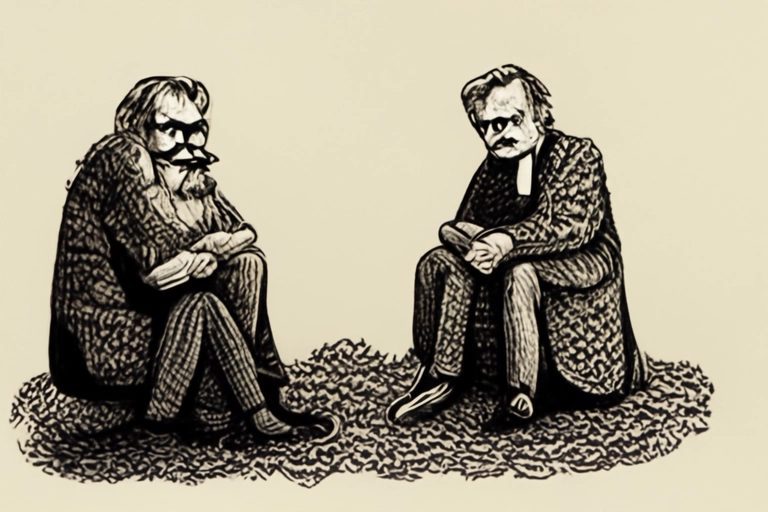 Nietzsche, in contrast to Hegel, believes that we must do much more than simply identify the principles our activities are meant to uphold and evaluate how closely our practices adhere to these goals. We must establish a benchmark that can be utilized to assess the fundamental goals of these institutions. This highlights the stark contrast between Hegelian and Nietzschean accounts of normative authority, and it also moves Nietzsche a little bit closer to the Kantian viewpoint.

Consider the lifetimes of the two philosophers. the globe was undergoing a profound transformation. The Romantic era had started.

Nearly all of Nietzsche’s books contain references to Hegel; Birth of Tragedy and Philosophy in the Tragic Age of the Greeks may be the only exceptions. Nietzsche also occasionally equates Hegel with what he refers to as “German Philosophy,” and at other times, he uses Hegel without specifically mentioning him.

However, you could be let down if you were expecting, say, a series of passages where he provides a prolonged critique of Hegel in an explicit way. Even worse, there is considerable dispute on Nietzsche’s Hegelian or anti-Hegelian leanings, or whatever.

Deleuze claimed that Nietzsche was actively moving away from Hegelian thought, although it is possible many people are dubious of Deleuze’s interpretation of Nietzsche.

Why did Nietzsche disapprove of Hegel?

Like several of the other important western thinkers, Nietzsche had a very strained relationship with Hegel. Nietzsche almost always has an element of the provocateur in him, like a little trickster. His speech always comes out as a challenge (hence the hammer) This means that one shouldn’t consider every criticism as the opinions of Nietzsche himself though.

Nietzsche frequently speaks of the naivety of post-Kantian idealism, describing how eagerly young German philosophers would look for new categories to add to Kant’s legacy. Even if Hegel is not included in this statement, it captures the overall idea of the system. The adage “I distrust all systematizes and shun them, to will a system is a lack of integrity“

According to Nietzsche, every philosophical work is a mystery of the author’s wishes and will, as stated in Beyond Good and Evil.

Main Differences between Nietzsche and Hegel

To strive for a system, as Hegel does, is to misunderstand this idea; to strive for the “idea” and the unchanging reality are, in Nietzsche’s view, Hegel’s expressions of his will rather than a perfect revelation. You must accept Nietzsche’s Dyonisian side, which is in direct conflict with Hegelian dialectic.

The Dyonisian is a shape-shifter who is unrestrained, palpitating with vitality, like flowing music.

Hegel’s dialectic is really Apollonian; it holds that there is a specific form and aspiration that permeates all of history and that it can all be seen in the same, indivisible light. What did Nietzsche think about Kant, Hegel, and Leibniz? The main reason Nietzsche dislikes the Hegelian system is because it foretells the future and turns it into the present. “Eternal return” and “Amore fati” rely on the Will, one that cannot aspire if future becomes past since it is deprived of potentiality, it is already in is course to the Absolute Spirit. Because the Will must be for its own purpose and not for some ultimate form, potential exists in Amore Fati, in fact it exists superlatively.

Nietzsche was not a fan of Systemic Philosophies

The Hegelian school of thought portrays itself as an organized, systematic body of knowledge. It does not represent a sentiment or an insight. A knowledge and a science, philosophy. Liked greek philosophy for the very fact that it isn’t a way of life.

it should be evident that Hegel only considered Systematic philosophy to be proper philosophy. Fiedrich Nietzsche wrote:

That demonstrates a clear disagreement between the two philosophers about the nature, goals, and definition of philosophy.

It is commonly known that Nietzsche never examined the logic behind any of his clever proverbs or aphorisms. Nietzsche didn’t even mind if he occasionally contradicted himself; he loved to reference another wit, Ralph Waldo Emerson, who said:

“A foolish consistency is the hobgoblin of little minds.”

Nietzsche may be well-liked by the populace, but it hardly ensures his inclusion in Hegel’s History of Ideas.

Nietzsche was more of an Artist than a Philosopher

Because Nietzsche did not write any treatises on Logic, Ethics, Politics, History, Aesthetics, Natural Science, or any of the customary works by ancient philosophers, according to Hegel, Nietzsche belongs exclusively to “popular philosophy.“

Probably Hegel would have appreciated Nietzsche’s inventive writing. I doubt that Hegel would truly believe Nietzsche had anything to do with what he considered to be significant. Hegel was pretty much a materialist who imagined a mechanical universe.

Why did Hegel conceive in such a convoluted way?

. Hegel was attempting to engage in a very particular game at its most difficult level, one that many still hold to be nonexistent since they haven’t progressed past the first. He was attempting to employ German linguistically for a purpose for which it was not naturally and unavoidably suited.

The Buddhists Call this method of Philosophy “Upaya”

Hegel was attempting to develop what Buddhists refer to as a new “upaya,” which is why his theory is so convoluted.

Upaya simply means a “skillful method”. It is a subjective link to an objective truth. If the entire premise is that words and concepts waiting in the wings to explain the issue themselves are actually the source of illusion, then the very concept of it admits the necessity to utilize non-straightforward ways innately, and not simply incidentally.

There are schools in response to this that completely or almost completely avoid any proper “teachings”; however, most schools make extensive use of “upaya,” which is the very foundation of the expansion of the dharma, to use methods other than those that are remembered and recorded as having been taught by the Buddha. (Of fact, these schools all use apocryphal scripture as their foundation; they typically assert that the teachings they advocate are late-career or “hidden” doctrines delivered in lectures by the real Shakyamuni.) If attaining enlightenment is what is important, becoming too fixated on a specific method is pointless.

Hegel was a significantly rare mind.

Hegel has the kind of extraordinarily unusual intellect that could learn to distinguish and integrate by just studying an article or reading a page in an encyclopedia. He was able to balance a very heavy pyramid of conceptualization over in his head to lay it out into a specific kind of way. Everybody else who came across Hegel could never envisage trying to spell out only with ideas alone, in a book, features of the widest reality. However, it is conceivable to map out with pure abstraction and pure “reason”, features of the broadest reality. He was attempting to explain the increased demand for a specific item.

Of course, the wonderful irony is that Hegel made this decision because he could see philosophy’s direction: to an extravagant and chaotic endeavor once freed from external restraints. He believed he was rendering philosophy infallible.

It is sometimes referred to as “rationalism” or “idealism,” but these labels confuse the source of knowledge’s input and the methods for validating it. For something to be properly understood, it must be promptly and leading to activation, speakable, and explicable, according to historian Huston Smith.

Humans already have sufficient knowledge of God; nevertheless, they lack awareness of what they are, let alone understanding of how they are. You always need to go out and “acquire” information of everything you wish to know, even after having initially stumbled across it. The European mentality upheld the idea that the human animal was a “exception” to nature, as held by that of the Ancient Greeks and Hebrews, and thus conceived of “knowledge” as a “full package,” something wholesale, apart from the type of consciousness held by animals.

The last twilight of this project is Nietzsche. The eventual acknowledgment of this mutual intertwining between pupil and instructor; and gnosis as experiences, a feedback mechanism, required philosophy to be more poetic and interpretivism than it otherwise would have been.

And beyond Zarathustra, he is so brilliantly “unscientific” simply because he is aware that he is addressing to the same (necessarily small) audience that understood what Hegel was saying. The arguments are still there, but much more passionately.

In contrast to other deconstructionists, Nietzsche was more concerned with the way that form reflects each author and generation. He was also more of a psychologist who took the interdependence of form and function for granted. The entirety of what he had to say about appropriate “metaphysics” may be found in Zarathustra, which was purposefully not a straightforward piece of non-fiction. It is an apocryphal text that can only communicate in cryptic and selective ways, just like any other text, and whose secrets are not actually intended to be fully revealed, especially not all at once or to everyone equally and without bias.

Who would Win; Hegel or Nietzsche?

Clearly the two are very different. It is clear that Nietzsche is a considerably better stylist than Hegel, but because he lacks a coherent philosophical framework, it appears that he marks a severe decrease in philosophical thought. However, this argument is not persuasive. He did not have a system for good philosophical reasons.