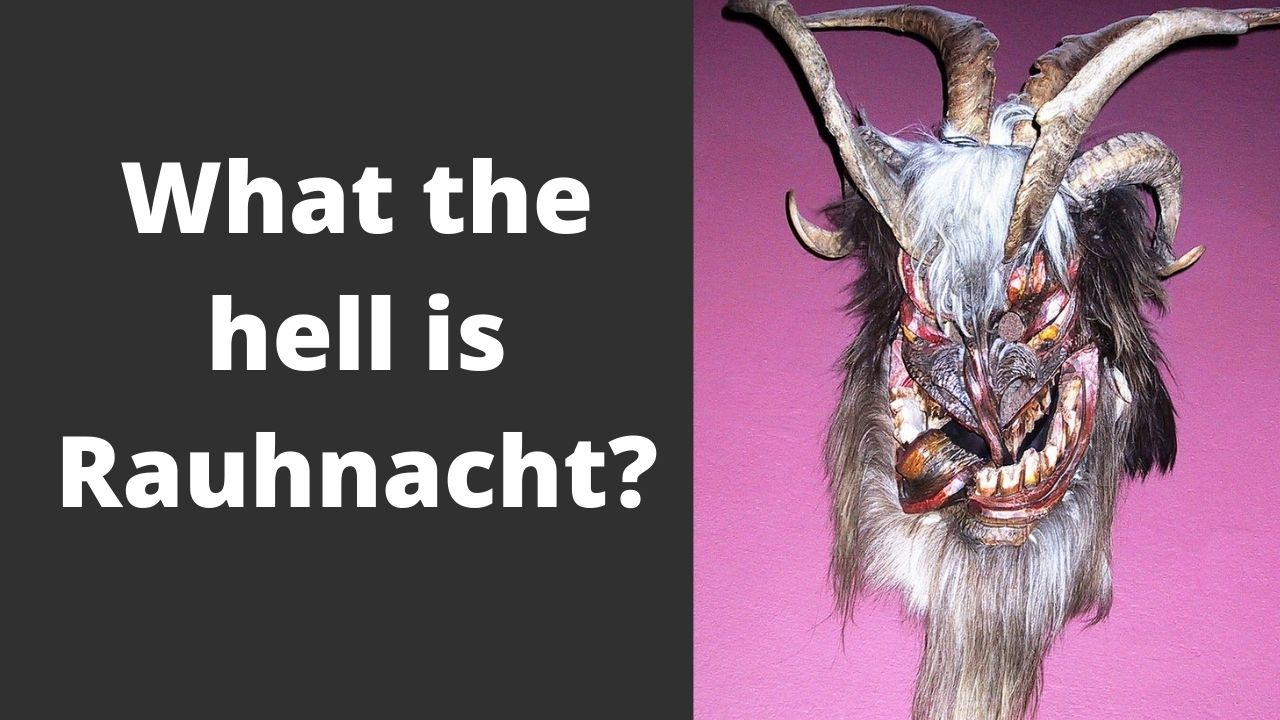 Rauhnacht is a Bavarian tradition that happens generally between Christmas and Epiphany. The thin veil which separates our world with the spirit world is temporarily severed and because of this severance of the earthly veil the spirit world spills into our realm.

To the Germans, the Rauhnacht conjures memories of cold winter storms and snowbound days at home.  Time stops and the psychological is somewhat disturbed.  Because of this there is conjured all sorts of images of witches, ghosts, and demons the kind of which terrify the soul.  Yet why does this kind of sorcery happen so close to such a religious holiday as Christmas?

The 12 nights are also called “the Wolfs nights” (because the German word for 12 Zwolf sounds like the German word for Wolf…ahem..Wolf). A drama takes place whereby the plains of existence are slightly opened up between our realm and the realm of the spirits. As if a veil has been disintegrated.  This unveiled earthly reality is slightly made invisible and here the balances of natural forces are aligned. Unfortunately however now the essential ghoulish dimensions that have been unbalanced by our own ignorance and psychological defensive barriers can suddenly be witnessed as time and space are quickly brought into a new focus.

Rauhnacht takes place between Christmas and another holy holiday the Three Kings day or Epiphany.  This tradition has been maintained for a very long time. It all takes place on the darkest nights of the year where the sun rises late and sets early.  Because of this “shift” the majority of the light comes from a small oven fire or your computer screen or even just a candle.  In the olden days, there was basically really nothing to do this time of year.  It was too cold to plant things so farming was generally out of the question and foraging didn’t make a whole of sense.  Therefore the only thing to do was to wait inside.  At this time of the year is the need for the warmth of the family is needed more than ever.  A hearth of the patrimonial home and its essentialness to livelihood is a stark reminder as the world hunkers down.

What is the Rauhnacht?

Rauhnacht is a component of the middle European tradition.  Mainly it is practiced in southern Germany. It has been being carried out of the span of a Millenium and dates back to even before the Roman Empire.

The Rauhnacht is an invitation to the world of magick. This is because through this thin veil between the realms we are able to catch a glimpse of the “other side” and it helps us to remember the natural rhythms of nature.

Nobody really knows the true origin of Rauhnacht.  Historians think that it dates back to pagan traditions.

the holy time of the transition

The name “rauhnacht” is from the Middle High German. “Ruch” which means to go back. It also has its etymology with “rauch” or to smoke or flame.  This is because here there was a probability for fire ceremonies.

When is the Rauhnacht?

For every region, it begins at different times.  At the beginning of the Rauhnacht is it on the Thomas night during the winter solstice on the 21 December.  Actually, this is the longest and darkest night of the year.  This particular interpretation is oriented around the north European “Julfest” or the “mid-winter festival.”  This is how the Celtic Winter solstice would be celebrated.  This is why in Sweden the Rauhnacht begins much sooner, namely around the Luciafest that is around 13 of December.

Many people think that the Rauhnuchte should only be 4 days.  Actually, this time is carried out in the time of the winter solstace (21 December) The Christian Christmas time (24-25 of December) all the way until the “three kings” festival of (5-6 of January)

Today the tradition is carried out for the longest time.  There are 12 days of Rauhnacht between Christmas and the day of the 3 kings.  This is around 12 days. During Rauhnacht many Bavarians will spend some time of their day in meditation.

It is believed this is the time in which the entire universe ‘takes a break.’ This is when the old year dies and the new year is born.  Hence therefore it is known as “the death time.” Think of it as a temporal rupture, a no-mans-land of space and time.

One of the reasons that people refrain from going out during this time is simply because it is believed that the thin veil which separates the spirit world from our dimension is fractured or becomes thinner.  In this way demons, witches and spirits leech out into the realm

Rauhnacht is a time to develop intuition. Spirits spill out from their world and co-mingle in our realm.

The time of the wolf is a time between past and future, dark and light, existing and non-existence.  Although this time can be seen as somewhat dangerous, it is also a time for intense spiritual and mental development. Because of this “chance” to expand ones consciousness the Rauhnacht is coupled with many rituals and prayers to accompany the individual through the experience.

Because of the ambiguous nature of the Rauhnacht it defies the binary logic.  Duality is only for the sensible time, a thing that goes beyond our standard notions of reality.

Every so often the world of the living must be revitalized by the dimension of the mystical.

Gods and Spirits of the Wolf

Middle European children are always taught that they must be exceptionally careful around this very testy time.  A curious superstition arises surrounding going to cemeteries and churches.  With the advent of the Rauhnacht, it is important to do everything in ones power to hold back the spirits that are seemingly pouring into our dimension.

Traditionally it was not allowed for people to hang their clothing outside to dry during this time.  This is because outside the zone of the spirit dimension could attach itself to the clothing and haunt it.  Eventually, this would lead to bringing bad luck to the people who are inside the house.

The Rauhnacht time is a dark time. Remember that in the dark our senses are greatly heightened.  We can smell better, hear better, feel better.  It reminds us that senses are merely figments of the mind. What senses lie beyond sensory perception? We know that some animals are able to see colors that the human eyeball is completely blind to.  Rauhnacht is a mystery of the beyond elements of existence.  It is the surplus dimension.

As the north wind blows and the winter grows ever colder, people could feel the drive of the ghostly.

During the wolf night, Odin the father God of the Norse Mythology goes out to hunt upon his eight-legged steed Sleipnir.  Here Odin drives forward the army of the spirits.

Frau Percht is a wicked old woman.  She is the goddess of the underworld and goes across the land to hunt for naughty children.  She traps the naughty children opens them up and then replaces their organs with trash.

There are many ways in which we can connect to the spirit world.  It is never too often that there is a point of inflection between our dimensions.  Often times this ‘other world’ goes wholly overlooked.  However, with the time or Rauhnacht it becomes apparent that what we see in reality is not what it appears to be.  Wholly there is a surplus of spirit that must go recognized and Rauhnacht is that immortal time.

Anybody who has endured a winter in Bavaria can attest to a change in not only the temperature but also in the general atmosphere.  Things begin to seem a little bleak and dreaery.  Truly it is another world entirely yet only for a short time.